Slupsk, a pleasant town in the north of Poland, is not an obvious tourist draw, even though it has rich history dating back to 8th and 9th century with traces still preserved in numerous buildings and monuments. The architectural attractions are reason enough to visit Slupsk, but what really makes the city special is its unique blend of history and present. Slupsk ought to be described as a musical city, with its annual International Festival of Organ and Chamber Music as well as the Polish Piano Festival. 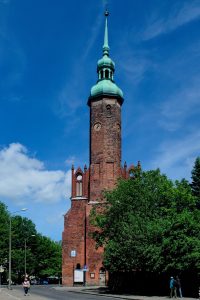 As Slupsk is favourably located close to the seaside and major transit roads, most travellers pass through the city in the summer months on their way to the Baltic resorts of Leba, Ustka, Darlowo, Jaroslawiec and Rowy. Yet those who decide to stay longer are not in for a disappointment. Indeed, in the opinion of many people, Slupsk is the most beautiful city of northern Poland.

It is a pleasurable experience to explore the remnants of its tumultuous past: Gothic and Secession tenement houses, the Renaissance-Gothic town hall, the 14th century town gates, the Old Town with its bourgeois abodes and interesting monuments – or the best-known of all of Slupsk’s landmarks, the 16th-century Castle of the Pomeranian Dukes on the Slupia River, now housing Museum of Mid-Pomerania. It has the Poland’s largest collection of paintings by the artist Witkacy, an avant-garde artist and playwright (1885-1939).

Slupsk also offers welcome quiet places – green spots in the centre and along the banks of the river, perfect for strolling and relaxing. In the old part of Slupsk, do not miss the scenic Nowobramska Street that was recently modernised to improve its historical and aesthetic values. This historic city has a well-developed tourist infrastructure, which includes hotels, hostels, restaurants, cafes and bars at prices to suit every budget.

A provincial capital of Central Pomerania (a region in the north Poland), Slupsk is picturesquely situated on both banks of the river Slupia. It has been the capital of Slupsk County in the Pomeranian Voivodship since 1999, and earlier was the capital of the voivodship.

Slupsk covers an area of 43 km2 and has a population of 102,000. Its humid climate and changeable weather are due its proximity to the sea (the seaport and seaside resort in Ustka is only 18 km away). The average temperature in January is 2 degrees Celsius, while in July it rises to 16 degrees Celsius.

Slupsk started out in the 11th century when Slavonic merchants and craftsmen established a fortified settlement, with ships sailing up the Slupia river harbouring there. In the 12th and 13th century the city, Castellania Slupensis, belonged to Slawno Duchy and around 1230 was united with Pomerania and its capital of Gdansk.

Since 1308 the land of Slupsk was administered by the Brandenburg margraves, and two years later the town was granted city laws and privileges. It reverted to the Western Pomeranian dukes, and then passed into the hands of the Teutonic Knights for 12 years before being repurchased. In the years 1368-1372, the land of Slupsk became a separate duchy, with Slupsk serving as both its capital and the residence of its duke. Until 1630 the town was in the possession of the Western Pomeranian dukes. In 1648 Slupsk was again in the hands of the Brandenburgs and remained under Prussian rule until World War II. Though subject to Germanisation, the area of Slupsk kept its Slavonic character.

In 1944 a section of the concentration camp of Stutthof was built in the city. Following World War II, Slupsk, as with the whole of Pomerania, was placed within Polish borders. Ancient Slavonic lands were united into one state organism.

Would you like to visit Slupsk? Browse the catalog of Poland tours
Check our best tour
2023 dates available
Escorted Tours Poland