Among all the seaside resorts competing to be the summer capital of Poland, Sopot seems the most deserving. This is a fantastic holiday destination with sunny beaches, the longest wooden pier in Europe, and an active nightlife provided by its numerous bars, pubs and clubs. Two other interesting cities nearby are Gdansk and Gdynia.

Sopot is the smallest town of the Tricity metropolis, situated just between Gdansk and Gdynia. The location makes Sopot a great starting point for Gdansk tours. Its population of only 40,000 is modest in comparison with the 2 million tourists who visit it every summer. Many of them are lured by Sopot International Song Festival, the largest event of its type in Europe after the Eurovision, and which takes place at the Forest Opera house every August. 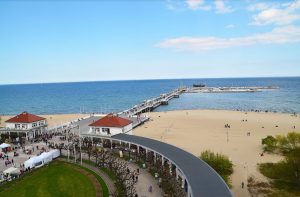 Sopot provides many sporting and fun facilities, like water slides, venues for beach football tournaments, sport equipment for rent, tennis courts and so on. If you like the simple life of frying in the sun, then this can also be fully satisfied with Sopot’s clean and sandy beaches. And when the heat gets too much, then almost on the seashore you will find the Summer Theatre.

This town rarely sleeps, especially in summer when its clubs fill with people. Sopot strives to maintain its traditions, such as its casino dating from the 1920s and the significant number of stylish restaurants and atmospheric bars, none of which should disappoint even the most sophisticated frequenters of such places.

Beside the bustling “Monciak” Boulevard, there are some charming peaceful areas where you may enjoy Art Nouveau villas, pleasant parks and forests cut through by gorgeous ravines. The atmosphere of the pre-war resort, like that seen on old sepia postcards, can still be felt.

Sopot owes its popularity to its location on the coast of the Baltic Sea. The town is located on a high scarp, dividing it into two parts (high to the west and low to the east), and along its foot lies the beach. The hilly part of Sopot is mainly covered with an ancient forest of beech, oak and pine, riven through by several brooks.

The mineral waters springs and good microclimate makes Sopot a great health resort, sheltered as it is from harsh maritime winds by the Hel Peninsula.

The name “Sopot” is first mentioned in 13th century records. It was primarily an old Slavonic settlement dating back to the times of the early Middle Ages. It occupied an area overgrown with old beech and oak trees, surrounded by wood-and-earth fortifications. The inhabitants made their living from fishing and a range of crafts. Its general prosperity was almost completely lost with the foundation of the ducal fort in Gdansk in the 13th century. For a long time Sopot belonged to the Cistercian abbey in Oliwa (now a part of Gdansk).

At the turn of 17th and 18th century, Sopot was transformed into an increasingly fashionable spa that lured an affluent and aristocratic set as much for its soothing waters as for its vibrant social life. Although towards the end of the 18th century Sopot was burnt and nearly razed to the ground by Russian troops, it never lost its acclaim as a holiday and health resort. After the partitions of Poland left the town within Prussia it became a playground for Europe’s ruling classes.

In the meantime, it was popularised by a former doctor of the Napoleonic Army, Jean Haffner. The 19th century saw a rapid growth of the spa facilities, such as a public baths, sanatorium and park, continuing even after Haffner’s death. 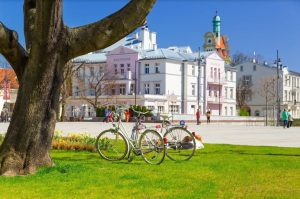 In 1870 Sopot was linked to Gdansk by railway, and this was later extended to Berlin. By the end of the century the number of visitors had grown to over 12,000 per year. It was also a favourite holiday destination of the German emperor, Wilhelm II, who had a summerhouse and villa (now the Maryla and Magnolia hotels) there. It was he who granted Sopot city rights in 1901. Opened at this time were a horseracing track, public tennis courts and a new theatre in the woods – a predecessor of today’s opera house.

As a consequence of the Versailles conference ending World War I, Sopot was included under the jurisdiction of the Free Town Gdansk. Soon after the war the Grand Hotel created a casino, which proved to be highly popular and successful. From 1922 a Wagner music festival was held in the Forest Opera, and then 6 years later the pier was extended to its current length of over 500 metres.

World War II began in nearby Gdansk, and for a few days the Grand Hotel was home to Adolf Hitler during the German invasion of Poland. Locals of Polish or Jewish nationalities were expelled from Sopot. Even earlier, in 1938, Nazis had burnt down the synagogue in the town.

Sopot survived the war relatively undamaged, and after World War II it was returned to Poland and began to recover quickly. In 1961 it became home to the Sopot Festival, a song competition for groups and singers from home and abroad. Nowadays it is a well-known holiday resort offering unlimited possibilities for active vacationing, as well as more relaxing spa activities. It lures swarms of Poles, Germans, Swedes as well as other foreign visitors.

Would you like to visit Sopot? Browse the catalog of Poland tours
Check our best tour
2023 dates available
Escorted Tours Poland

Recommended tours while stay in Sopot