One of the leading Polish ports on the Baltic Sea, Swinoujscie is also a health-resort which draws guests all year long and the only town in the country located entirely on islands, a total of forty-four of them. It offers all and more than one would expect from a seaside tourist destination: the kilometres-long sandy beach, billed as the widest in Poland and which delights everyone interested in water sports; excellent fishing; rich flora and fauna on the river Swina… and the possibility to travel to Germany or Scandinavia by ferry to boot! 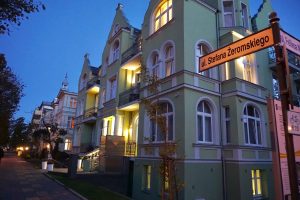 If your idea of a perfect holiday is to laze on a sunny beach and to bathe in an azure sea, then you will not be disappointed with a stay in Swinoujscie. The beach is beautiful and gently sloping, making it safe for kids.

While you are not lying on the beach, you can take a stroll to the marvellous 170-year-old Spa Park, which offers an exceptional variety of Mediterranean vegetation. If you are interested in bird watching then you can visit Karsibor Island, where a bird reserve of international significance is located. The range of species within the reserve is just breathtaking.

For a chance to see some truly unique items, head over to the Museum of Sea Fishing, housed in the old town hall. The museum tells the town’s history and there is also an exhibition describing the growth of the local sea fishing trade throughout the ages. There are displays of navigational devices and a most diverse collection of sea fauna.

Wolin Island is the home of the town’s symbol, the historic lighthouse, which at an elevation of 68 m is the tallest on the Baltic coast. It underwent a major restoration in 2000 and since then has been open to the public. It gives you a wonderful view of Swinoujscie and the region from the top.

Other sights that should be included on your list are “Stawa Mlyny”, a beacon shaped like a windmill and which is the second symbol of Swinoujscie; the 18th century King Christ Church with its model of a ship hanging from the ceiling; the neo-gothic church “Stella Maris”, famous for its superb stained glass windows; and lastly, Angel Fort, a 19th century fort on the bank of the river Swina, built in the harridan Mausoleum style. 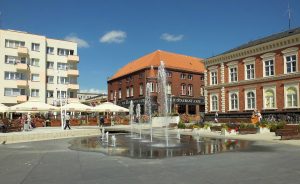 Swinoujscie is located in the far north-western part of Poland, at the mouth of the river Swina on the Baltic Sea. There are forty-four islands within the town area, but only three of them are populated – Wolin, which is the biggest island in Poland, Uznam and Karsibor. More than 80% inhabitants live on the Polish part of Uznam Island (the larger part of it belongs to Germany).

Bordered by the Szczecin Bay, the Baltic Sea and the German frontier, Swinoujscie and its locality covers an area of 195 km2. This is the closest Polish town to Denmark (150 km) and Sweden (175 km), while Berlin is a mere 160 km away.

In ancient times, due to its desirable geographical location, the area of present-day Swinoujscie was attractive for many peoples from the surrounding territories, including Germans, Danes, Swedes and Poles. The first human settlements date back to around 4200-1700 B.C. when the early Germanic and Slavonic tribes came to settle on these lands. More than a thousand years ago, long before Swinoujscie was settled, the neighbouring island of Wolin had already established itself as a successful naval centre. In 1128, Bishop Otto of Bamberg arrived in Wolin to Christianise its inhabitants. There is also a mention of “a castle on the Swina River” in a document issued by Prince Bamim I in 1261.

In 1630 the troops of the Swedish king, Gustav Adolf, arrived in Uznam and Wolin, the monarch staying for a while in the presbytery on Karsibor Island. Nearly a hundred years later, as a result of the Treaty of Stockholm in 1720, Prussia took over both Wolin and Uznam islands.

In former times the banks of the river Swina were dotted with the fishing settlements of West and East Swina. By the 17th century the river had been made navigable for ships of considerable size. Swinoujscie was established in 1748 on the site of West Swina and received a town charter from Frederick the Great, King of Prussia, in 1765.

Its broad unpaved streets and one-storey buildings Dutch-styled houses gave Swinoujscie a somewhat rustic appearance, though the town’s economy totally relied on shipping (and, on a smaller scale, fishing). In 1824 Swinoujscie became a seaside resort and it was not long before it gained renown as the most popular spa in Europe. The year 1859 saw the completion of the construction of what was then the world’s tallest lighthouse. In 1876 a railway link was opened between Swinoujscie and Berlin, and four years later the opening of the Piast Canal significantly shortened the route from Swinoujscie to Szczecin.

In March of 1945 Swinoujscie was heavily destroyed by U.S. bombing. The town was deliberately chosen as the target for U.S. bombers due to large masses of refugees from East Prussia and surrounding territories, who had moved there to escape the Soviet Army. There were at least 23,000 casualties, the majority of them the said refugees. After 1945 Swinoujscie was annexed by Poland and in itself became part of the German lands lost east of the Oder-Neisse line. Once its German population had been driven out, the town was repopulated by Poles, mainly those expelled by the Soviets from the eastern parts of Poland.

Would you like to visit Swinoujscie? Browse the catalog of Poland tours
Check our best tour
2023 dates available
Escorted Tours Poland

Recommended tours while stay in Swinoujscie