Szczecin is a lively city, an important seaport and a shipbuilding centre close to the border with Germany. Although the mediaeval centre of Szczecin was severely destroyed during wartime, there are still some remaining magnificent monuments of architecture, reminiscent of the times when Szczecin, as part of Prussia, was considered the “Paris of the North”. But Szczecin is mostly about water and lush verdure: rivers, lakes, woods and parks take up half of the city area. 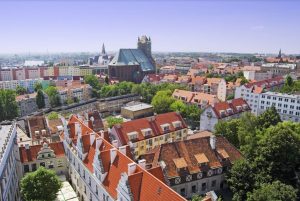 Szczecin, a city of about 406,000 people, ranks among the largest towns in Poland. It is also the biggest urban area in the north-western part of the country and the capital of the province. Its location in the top left corner of Poland’s map, together with its strong cultural and economic links with Germany, makes it an important commercial and transit centre.

Apart from being a traditional junction of main European routes, Szczecin is considered to be a crucial seaport, closely connected with the nearby Swinoujscie port and a large shipbuilding centre. While Szczecin attracts mostly business travellers, it can also form an interesting tourist destination. Several enchanting sights, the many parks, and the impressive number of bars are Szczecin’s main attractions.

Its architecture is often compared with Paris, as the heart of the city is a star-shaped square, with diverging avenues. There is another reason for making the comparison with Paris – Baron G.E. Haussmann, who created a town-planning project for the French capital, also designed Szczecin.

Apart from the forests surrounding the city, there are other attractive areas in the vicinity – the seaside resorts of Miedzyzdroje and Rewal, the picturesque Wolin Island, and Swinoujscie with its ferries to Sweden and Denmark. 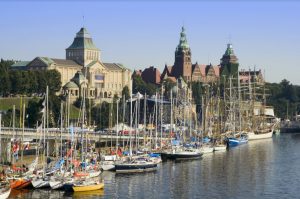 The city of Szczecin is situated close to several large expanses of open water. The Baltic Sea is within an hour’s driving, the Szczecin Lagoon, a part of the Baltic almost cut off from the open sea with a series of islands, is even closer, while to the east the city is almost surrounded by Lake Dabie. Szczecin is on the delta of the Odra River, and several of the Odra’s confluents flow through the city. The German-Polish frontier is close to Szczecin, and Berlin is only 120 km away. The closest border crossings are in Kolbaskowo, Rosowek and Lubieszyn.

Szczecin is called the green city, but this is not restricted to the city itself as some local areas are very attractive, especially three vast local forests. These consist of Beech Forest (Puszcza Bukowa) with the Emerald Lake, Wkrzanska Forest and Goleniowska Forest. Lake Dabie, one of the biggest lakes in Poland, is also a great local recreational resource.

Szczecin is a city where the historical and cultural achievements are shared by more than one nationality. Its beginnings go back to the 8th century, when the Castle Height was inhabited by Slavonic settlers who established a borough there. For a long time Szczecin belonged to the dukes of Western Pomerania, a branch of Piast dynasty that ruled in Poland. They built a strong autonomous state and Szczecin became a member of the Hanseatic League. The crucial milestone in its history was the location act of 1243, which introduced town rights under the Magdeburg Law model.

The next momentous point in Szczecin’s history was 1648, when Western Pomerania found itself divided between Sweden and Brandenburg after the death of the last Pomeranian prince during the Thirty Years War (1618 – 1648). Szczecin itself passed into Swedish hands for almost a century, and this surprisingly resulted in the downfall of the town. As the Prussians wanted sea borne trade free from Swedish customs taxes, they dredged the Swina River and built a new seaport in Swinoujscie.

In 1720, after the great North War, Szczecin became part of Prussia. The new authorities transformed the city into an important military centre, strengthened with fortifications. During the Napoleonic wars it passed to the French, becoming an important fortress in the process.

In the 19th century Prussia once more stimulated the economic growth of the city, introducing several reforms that included industrial and professional freedom and the emancipation from customs barriers within the country. The Szczecin-Berlin railroad line was constructed in 1843, making Szczecin yet more attractive as a trade centre. This attracted many investors, helping to develop the shipbuilding industry. The second half of the 19th century saw the rapid development of several branches of industry partly due to the city’s close connections with the seaport. In 1913 a canal connecting Szczecin with Berlin was opened, and which guaranteed more cargo for the harbour.

In April 1945, the 65th Russian Army conquered Szczecin and it then passed to Polish administration in July 1945. The city, now on the newly established Polish western border, had survived the war with little damage. Although the former image of the city changed, its unique character was preserved with the captivating charm of its historical secessionist architecture and the beauty of its lush vegetation.

Would you like to visit Szczecin? Browse the catalog of Poland tours
Check our best tour
2022 dates available
Escorted Tours Poland