Szklarska Poreba is the largest holiday resort and centre of winter sports in the Sudeten Mountains, with plenty of space for everyone among these beautiful surroundings. Although there are some museums in this animated town, people flock here mainly for the splendour of nature and for the abundance of outdoor activities the region has to offer. The town offers a wide variety of accommodation facilities. 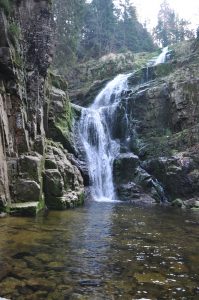 The name Szklarska Poreba means ‘glass forest clearing’, and actually comes from the local glass making industry. For centuries the manufacturing of glass and glass products has been the chief driving force behind the development of the town. Szklarska Poreba is the site of the first glassworks to be founded in the Sudeten Mountains, which occurred as early as the 14th century.

Szklarska Poreba is considered to be one of the finest mountain resorts in Poland, and is well known among foreign visitors. In fact, it is busy with tourists almost all year long. In winter most of the town’s 10 hotels, 90 holiday homes and 50 pensions are occupied by skiers who want to take advantage of the slopes surrounding the town. There is a two-stage chairlift to carry people up Mt Szrenica, to an elevation of 603 m.

The town serves as a departure point for trips to the Karkonosze and Izery Mountains, while several scenic sights are within walking distance the centre. Only 1.5 km away from the town, near the road to Jelenia Gora, you can admire the popular and beautiful Szklarka Waterfall, truly the loveliest in the Karkonosze Mountains, although at 13 m it is not among the highest. Its beauty was already well known by the 18th century.

Szklarska Poreba lies 440-886 m above sea level in the south-western part of the country, about 130 km from the Lower Silesian capital of Wroclaw and almost at the intersection of Poland, the Czech Republic and Germany. The little town occupies the valley of the Kamienna River and its tributaries in the Karkonosze Mountains, the latter constituting the highest part of the Sudeten massif.

Overlooked by Mt Szrenica (1362 m), Szklarska Poreba covers an area of 76 km2 (86% of the total area is forests) and has a relatively small community of something over 7,000 residents. The climate is high mountain, with relatively low temperatures, a lot of sunshine, low humidity and snow cover remaining for about 110 days each year.

Szklarska Poreba obtained city rights in 1960, which makes it one of the youngest towns in Poland. However, by the 12th century the area was already being mined for gold and other natural riches.

The year 1281 marked the birth of the glass-working industry in the region. At that time the Knights of St. John from the huge monastery in today’s Cieplice purchased a piece of land stretching from Piechowice to Izerskie Garby in the Wysoki Grzbiet Izerski mountain range.

The glass-works were heated by furnaces and, once all the neighbouring forests had been cut down for fuel, they were moved to a new location. Moving the furnaces proved much easier than transporting large amounts of wood.

In 1575 the first permanent glass-works were founded on the Czeska Struga Stream. Owing to technological improvements at this time, the glass-works here produced a better quality white glass in place of the “forest” product. The latter displayed a slight colour resulting from the minerals it contained.

Persecuted in their own country, Czech Protestants came to the area in 1578 and established a settlement in today’s Marysin (a suburb of Szklarska Poreba).

The year 1825 heralded the beginning of tourism in the region, when a guild was formed from an initial 15 members. In 1842 the large crystal glassworks called “Jozefina” (and later renamed “Julia”) was set up. Today it still continues to manufacture highly sought-after crystal glass products.

There were 12 hotels in Szklarska Poreba in 1878, increasing six years later to 22 with shelters and inns too, and visitors could also stay at any of the 85 private houses. In 1888 Szklarska Poreba offered accommodation for up to 2,000 visitors at any one time. Local inns delighted guests with a wide selection of food – some had from 70 to 100 dishes on their menus. 1887 saw the foundation of the Municipal Tourist Traffic Development Union.

In 1891 the first pharmacy was opened, and then two years later locals and visitors alike could receive medical assistance at the first hospital. Electricity, gas and a railway line were introduced in Szklarska Poreba in 1902. In 1907 the first bobsled route opened – it underwent reconstruction between 1926 and 1928 and then again in 1933 for the world championship.

In the first half of the 20th century, tourism in Szklarska Poreba was still going strong and while in 1926 the town provided accommodation facilities for up to 4,000 guests, ten years later it could cater for up to 6,000 people.

Would you like to visit Szklarska Poręba? Browse the catalog of Poland tours
Check our best tour
2023 dates available
Escorted Tours Poland