The charming Old Town of Torun is of such international importance that it has been added to the UNESCO World Heritage List. Its red-brick Gothic architecture resembles the historic district of Gdansk, but with a much different atmosphere as Torun proves to be much friendlier, cosier and less spoilt by the influx of visitors. Its lively centre is full of diverse cafes and pubs, offering a refreshing stop after sightseeing. Torun specialises in a traditional gingerbread that will give your stay an additional, spicy flavour. 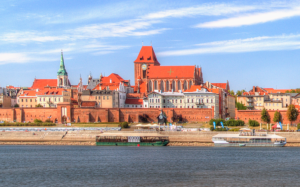 After the Second World War this calm medium-sized city in northern Poland became a huge centre of industry, specialising in producing artificial fibres. Nowadays most of the factories have closed and the city instead has grown into a popular tourist destination. The Old Town boasts a large number of sights, predominantly dating from the Middle Ages, such as St Mary’s Church, the Cathedral of St John and the Town Hall. The panorama of the historical quarter as seen from the left bank of the river or the bridge, especially when illuminated in the evenings, is really stunning.

As with most Polish cities, Torun has a tangled history. It is characterised by the several hundreds of years it was ruled by the Teutonic Order of knights and its participation in the Hanseatic League. Over a hundred years of German administration left also traces on the urban and architectural nature of the city.

Torun, while being the hometown of the astronomer Nicolaus Copernicus, also continues its tradition of being a strong scientific centre, especially in astronomy through one of the leading departments of the local university. In the Old Town you may visit a planetarium, while in Piwnice near Torun is an observatory containing the biggest telescope in Poland.

Apart from playing its role of tourist destination and academic centre, Torun is a place full of a vibrant cultural and artistic life, hosting important festivals like the Kontakt festival of theatre and the Probaltica festival of music. 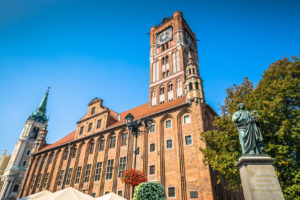 Torun is situated in the valley of the lower Vistula. The historic part together with the majority of the town is located on the northern (right bank) of the river. Its location had an impact on the development of trade in the past, accelerating its economic growth. Torun is popular during the summer, especially when it is quiet after the departure of the students.

The city is one of the two capitals of the Kuiavian-Pomeranian Voivodship. Since the province lies on the borders of the Pomeranian Lakeland, there are many attractive recreational areas within easy reach, including both lakes and forests.

The area around modern Torun was home to Slavonic settlements from the 11th century. The Teutonic Knights, brought to Poland by a prince of Masovia to defend his northern border, established the town itself in 1233. The city, also known as Thorn, was surrounded by a ring of walls and guarded by a castle built by the Teutonic Knights near the Old Town. 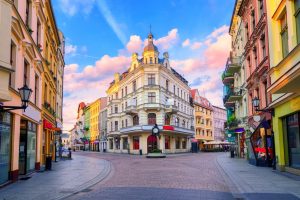 Torun grew quickly, attracting many merchants and craftsmen. To accommodate the newcomers, in 1264 the New Town with its own Town Hall and market square was established near the Old Town. The development of the town was uninterrupted from the 13th to the 16th century in spite of the Polish-Teutonic wars. They came to the end in 1466 when the treaty of Torun was signed, giving Poland a large strip of land from Torun to Gdansk. The town played an important role in international trade as a member of the Hanseatic League. The 16th century witnessed the growing importance of Protestants, who discriminated against the Catholic minority. During the Corpus Christi procession of 1724 a serious religious riots broke out which led to a bloody finale.

The town started to lose its glamour and significance in the 17th and 18th centuries. First, Swedish troops demolished and plundered Torun, and later it was annexed to Prussia as a result of the Second Partition of Poland. It remained Prussian for over a hundred years, with a pause during the Napoleonic Wars when it was a part of the Duchy of Warsaw.

In the 19th century Torun changed its character, becoming a border city of the Prussian state, later transformed into the German Empire. Being one of the major military bases, it was encircled by a chain of forts, built by French prisoners captured by the Prussians during the war in 1870. The fortification system, which is an outstanding example of military architecture, was untouched by both world wars. However, the forts do not exist on the tourist map of the town. The presence of Germans, which lasted more than a century, gave the town its characteristic neo-Gothic red-brick look that still can be seen today.

Torun was returned to Poland according the Treaty of Versailles after the World War I, but Poles enjoyed this independence for quite a short time. Following the September Campaign in 1939 the city was occupied by Germany, who used the forts as camps for officers. The post-war period brought the expansion of Torun in terms of its size and population. It became an important industrial city with faceless hectares of concrete blocks that are still home to almost a half of Torun’s inhabitants. Fortunately, the mediaeval Old Town, which is a real gem of architecture, remained unchanged.

Would you like to visit Torun? Browse the catalog of Poland tours
Check our best tour
Escorted Tours Poland

The Traces of Copernicus