With its specific microclimate, its mineral and curative water springs and its first class therapeutic facilities, Ustron has developed into a popular health resort. Moreover, what really attracts people is the town’s picturesque location at the foot of the Silesian Beskid. The mountainous region offers ideal conditions for different forms of vacation activities, such as climbing, skiing, biking and mountain running. Then again, if you are not the sports type and just want to rest and relax, there is no shortage of opportunities for that in Ustron. 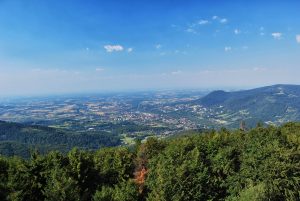 Ustron is one of the few spas which have maintained the laid-back atmosphere of an old spa town. At present it has 16 sanatoriums offering excellent conditions for treating patients suffering from difficulties in movement, breathing, nerves and the digestive system.

That said, it must be noted that while it is primarily a health resort, the town nevertheless can offer its visitors a wide range of recreational activities. The numerous well-marked walks in the immediate vicinity take the rambler to the nearby summits of Lipowski Gron (745 m), Rownica (884 m), Mala Czantoria (866 m) and Wielka Czantoria (995 m). You can ride the scenic chair lift to the top of Czantoria for unmatched views of the town and its surrounding slopes and peaks. Another attraction of Czantoria is the 710 m long Summer Toboggan-Run.

There are not many remnants of the town’s past left. The three historic churches remaining today are the wooden St Anna’s Church constructed in 1769, the Roman Catholic Church of St Clement from 1788 and the Protestant Church from 1835. Also worthy of a visit is the Ironworks and Smithy Museum. However, the most unusual draw is Sobieski’s Oak Tree from 1683, and which is believed to have been planted to commemorate King Sobieski’s triumph at Vienna.

Ustron is located at an altitude of 340-995 m in the Podbeskidzie region, approximately 12 km from the border with Czech Republic. It lies between the two mountains of Rownica and Czantoria, each densely covered with gorgeous beech and spruce woods. The springs of the Vistula River are 25 km away, and the river in this area has very clean water, offering good swimming conditions in summer.

As a health resort it is known for its mild and warm climate, and it receives one of the highest average rainfalls in the country (1200 mm).

Ustron was mentioned for the first time in written records in 1305, but received its town charter only in 1956. The town was marked on a map drawn in 1558 for King Sigismund II Augustus.

From the second half of the 16th century, Ustron and its environs were manorial land. A part of the town, however, belonged to the Piast dynasty. In the mid-17th century these lands passed into the hands of the Habsburgs.

The favourable climate and wonderful scenery contributed to the rise in the number of visitors. The first arrived in Ustron as early as in the 1650s, and people suffering from anaemia and diseases of the digestive track would come here to undergo medical treatment using whey. The early inhabitants of Ustron lived on agriculture and sheep-breeding. Iron ore was discovered here in the 18th century, resulting in the establishment of the steelworks in 1772. The ironworks, a foundry and a rolling mill were constructed not long after that.

During the following years the town began to develop in two separate directions. While the metallurgical industry was gaining more and more in importance, Ustron began to prosper as a health resort thanks to the smelters working in the great furnaces. They discovered that water heated up by the hot slag demonstrated healing benefits when used to relieve rheumatic aches. Once research had proved the medical effectiveness of the method, the then owner of these lands, Archduke Albert, went ahead and built a guest house with baths in the town.

The importance of Ustron as a health resort increased even more in the mid-19th century with the discovery of a ferrous water spring and layers of therapeutic mud. By 1882 Ustron was highly thought of among Austrian health resorts, and then in 1901 the first bath house was constructed. Of great significance for the growth of Ustron as a holiday and health resort was the building of an asphalt road from Katowice to Wisla. It connected the town not only with all the major towns of the voivodship, but with that of the whole of the country.

Ustron continued to develop more rapidly with each passing year; walking and skiing areas were adapted for the visitors, and new guest-houses, hotels and restaurants mushroomed. The town was given a status of a health resort in 1967.

Would you like to visit Ustroń? Browse the catalog of Poland tours
Check our best tour
2023 dates available
Escorted Tours Poland