The capital of Poland was practically rebuilt from scratch after World War II. Warsaw’s vibrant business downtown takes pride in its many skyscrapers and ambitious plans to build more. The catchy skyline is still dominated by the enormous Palace of Culture and Science – Stalin’s donation to the nation. Warsaw is a world in itself, with an eastern European flavour. Do not miss the beautiful Old Town, the Royal Route, the Chopin museum, several magnificent palaces and the former Jewish ghetto. 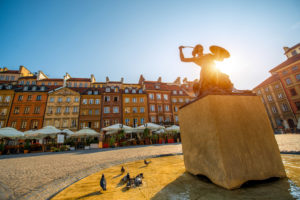 Warsaw, Poland’s capital since the late 16th century, is by far the biggest and fastest developing Polish city. Its population is estimated at 1.71 million and, as a powerful economic and cultural centre, the city attracts great numbers of people from all over the country in the pursuit of education or better job opportunities. According to some sources, some 18 new people move to the city daily. Warsaw is also visited every year by thousands of tourists from all over the world, especially during the summer.

The present character of the city is determined by three important factors: World War II, over 40 years of communist rule and the present years of transformation with its in-flow of foreign capital and investment. As any other European capital, Warsaw is full of striking contrasts. Historical monuments that were newly rebuilt after World War II coexist with numerous examples post-war housing estates of grey concrete tower blocks and ultra-modern glass office buildings built since 1989. Similarly, the hassle and bustle of its lively city centre, the constant flow of traffic and the crowds of people contrast with the serenity of the many beautiful urban parks.

Where is Warsaw located?

Situated on both sides of the Vistula, almost in the heart of Poland, Warsaw is also the capital of Masovia. This is a region rich in folk traditions, characterised by flat landscapes with large open fields. The river divides the city into two parts distinct in character. The more up-market western bank of the Vistula is where the majority of Warsaw’s businesses, banks, theatres and cinemas can be found. The poorer eastern side, known as Praga, is slowly loosing its neglected appearance with a growing number of modern shopping centres, office buildings and blocks of flats. 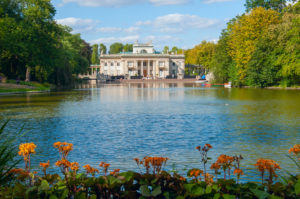 The origins of Warsaw date back to end of the 13th or perhaps the beginning of the 14th century. Over a century later Warsaw became the most important town of the independent Mazovia Duchy, which was annexed by the Kingdom of Poland in 1526. It was King Sigismund III Vasa who decided to move the capital of Poland from Krakow to Warsaw in 1596, after a fire had destroyed the Wawel castle. He and his court eventually moved to Warsaw in 1611, where today a 22m high column topped by his statue commemorates him in the centre of the Castle Square.

Gothic Warsaw was destroyed by fire in 1607, and later rebuilt in the spirit of Renaissance and Baroque – only to be devastated once more during the Swedish invasion between 1655 and 1657. In the Royal Castle, the residence of Polish monarchs, the Constitution of the Third of May was adopted – the first such act in Europe and the second in the world after America (1791). Soon after came the Partitions, when Warsaw together with Masovia was incorporated into Prussia.

During the Napoleonic Wars the city had hopes of liberation, with the Duchy of Warsaw being established in 1807. Following the failure of Napoleon, the Polish Kingdom – a quasi-state totally dependent on Tsarist Russia – was created in the area of Masovia.

The city and the country regained its independence following the end of World War I. In 1920 Poland was attacked again, this time by Bolsheviks, and the city defended itself in a battle usually referred to as the Miracle on the Vistula. After about 20 years of Polish independence, Warsaw was occupied by Nazis following the outbreak of World War II in September 1939.

In 1940 the Germans established the Jewish ghetto in the city centre. In 1943 an uprising broke out in the ghetto but, with practically no chance of victory, the ghetto inhabitants were defeated after a month of resistance and the ghetto was eliminated. In 1944, as the Soviet Army approached, a second uprising occurred, this time involving the whole city. The citizens of Warsaw were unable to liberate their city and the withdrawing Nazis destroyed 90 % of its fibre.

After the war Warsaw became the capital of one of the satellite countries of the Soviet Bloc. From 1946 on, great efforts were made to rebuild the city with the reconstruction of the Old Town recreating its pre-war shape. Apart from restoring the historical parts of Warsaw, new social-realist architecture was introduced to Warsaw. The population of Warsaw and its area grew intensely as new housing estates were created in the 1970s.

The communist rule fell in 1989 after the Round Table agreements between the Communist Party and the opposition, held at the Radziwill Palace in Krakowskie Przedmiescie Street. Since then Warsaw has experienced an unbelievable economic, cultural and architectural boom, which has rapidly changed the face of the city.

Would you like to visit Warsaw? Browse the catalog of Poland tours
Check our best tour
Escorted Tours Poland

Poland in One Day