The capital of Lower Silesia (Dolny Slask) has a huge Old Town built on several islands connected by over 100 bridges. Apart from its unique location, Wroclaw amazes with its volume of Gothic, Baroque and Art Nouveau architecture. Several musical and theatre festivals, as well as its busy nightlife, attract innumerable visitors from all over Poland and abroad. Wroclaw’s extremely complicated history, combining the cultural influences of Germany, Bohemia, Austria and Poland, has left its mark on the atmosphere of the city. 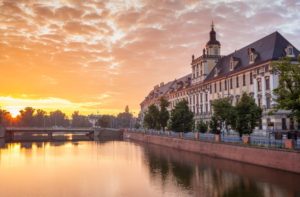 Wroclaw is the principal city of Lower Silesia, a voivodship situated in the south-western corner of Poland, adjoining the German and Czech territories. Its population of 632,000 makes it the fourth largest city in Poland.

The Old Town is comparable to Krakow’s in beauty and size, and includes the Gothic St. John’s Cathedral, the Renaissance houses near the Market Square, the Baroque university and lots of fine examples of Art Nouveau and Functionalism.

Apart from these sights, Wroclaw captivates with its marvellous location on the Odra River, its branches and tributaries that have resulted in a great number of bridges needed to join the islands. Despite Wroclaw’s failure to become the host city for the Expo exhibition in 2002, it has undergone a significant boom in terms of tourism. The intense promotion of the city resulted in a rising number of visitors.

The uniqueness of the city is due in part to its long and entangled history. Situated on the interface between ethnically diverse areas, Wroclaw has been part of the Polish, Czech, Austrian and German states. It has inherited the spirit of German Breslau (a previous name of Wroclaw), which partly disappeared when the Germans left the city, and that of Polish Lwow, whose population was resettled here after World War II. Wroclaw is also an important cultural and academic centre of the region, with a large student community that animates the city’s nightlife. 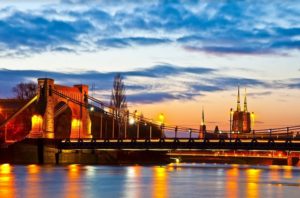 Wroclaw is picturesquely located on several rivers: the Odra and the smaller tributaries Olawa, Sleza, Bystrzyca and Widawa. Consequently, the city lies on 12 islands linked by many bridges. The Cathedral Island, the first Slavic settlement site, is no longer an island as a branch of the Odra was filled in. Wroclaw is the capital of Lower Silesia, one of Poland’s voivodships. The region to the north is characterised by flatlands and is predominantly rural, while to the south Lower Silesia is bordered by the Sudeten Mountains – a popular tourist destination in winter and in summer.

The history of Wroclaw is one of tumultuous and dramatic events. It began in the 10th century on Ostrow Tumski (the Cathedral Island) where Czechs founded the first town. Wroclaw then came under Polish rule, brought about by Prince Mieszko I in the 10th century. In 1000 it was already quite a large stronghold and the seat of a bishopric. After the Tatars invaded Poland, the town was moved to the left bank of the Odra River and rebuilt on a pattern that has survived to the present day.

During the divisions of the Polish state, Wroclaw was for a short period a capital of the separate Duchy of Silesia, later annexed by Bohemia (practically in 1335, formally in 1348). Under Czech rule, Wroclaw increasingly developed and extended its territory, while continuing to maintain cultural and trading links with Poland.

The Polish, Czech and German communities lived there in harmony until 1526, when the Bohemian king died without an heir and Silesia passed to the Habsburg Empire. The staunchly Catholic Austrian dynasty was fighting against the Reformation, which gained new supporters among the Czechs. The religious Thirty Years’ War left the city severely damaged. The Austrian anti-Protestant programme was coupled with a policy of Germanisation that continued when Wroclaw passed to Prussia in the 19th century as a result of the Austro-Prussian war.

Renamed Breslau, it became the second most important city of the country (after Berlin). The process of intense industrialisation in the 19th century included the construction of the first railway as well as a train carriage factory. Following World War I it remained within the German state. Nine German scientists and a writer who won the Nobel Prize were born there or were associated with the local university. Breslau played a key role during World War II, holding out against the Red Army for about three months, which was longer than Berlin. The results of the siege were dreadful: over a half of the city was razed to the ground.

After the war, Wroclaw was incorporated to Poland and resettled by Poles from other parts of pre-war Poland – while most of the pre-war inhabitants of the city left or were expelled to Germany. The restoration of the city took a long time and was eventually completed in 1980s. In 1997 Wroclaw’s Old Town suffered significant damage when the Odra River flooded, but after some repairs the effects of the disaster can hardly be seen.

Would you like to visit Wroclaw? Browse the catalog of Poland tours
Check our best tour
Escorted Tours Poland