The most popular mountain resort in Poland continues to attract a growing number of followers of the “winter madness”, while summer visitors who come to explore the magnificent Tatra Mountains, to drink in the beautiful scenery and the relaxed holiday atmosphere. Zakopane is, in fact, a small town noted for its charming highland architecture, colourful folk culture, remarkable sights and its vibrant Krupowki Street, bursting with life both during the day and the night. 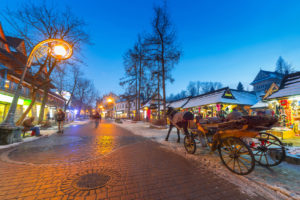 Since the end of the 19th century Zakopane has been a fashionable resort, popular in summer and in winter. The town has around 30,000 permanent inhabitants; small in comparison with the 1,500,000 visitors it receives each year. They are drawn by the wide range of opportunities to relax and to be entertained – and by its reputation. Those who love sport and the adrenaline buzz can choose between skiing, ski jumping, paragliding, hiking, climbing and cycling. Don’t ignore the simple pleasure of a stroll around the quiet streets, buying local snacks and craftwork, or a visit to a museum or other sight.

The traditional culture and art of the highlanders includes their architecture, cloth, food and music, all fascinating and still alive. Zakopane is rather like a large village, with wooden folk cottages adjacent to Art Nouveau houses that remain from the town’s popularity at the end of the 19th century. It was home to many famous artists at that time, and many of these have left their mark on the atmosphere and architecture. The most well known street in Zakopane is Krupowki – the town’s main thoroughfare and mall. There are plenty of restaurants, cafes, shops and stalls selling shoes made from calf leather (“kierpce”), woollen sweaters, wooden kitchen utensils, sheep fleeces and the “oscypek” salty cheese. 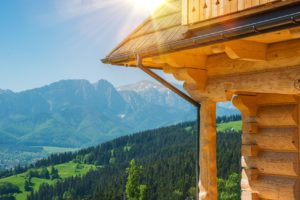 Zakopane nestles in a valley at the foot of Tatras, the highest part of the rocky Carpathian Mountains that form Poland’s border with Slovakia. Its highest peak is Mount Rysy, soaring to 2 499 m above sea level. To the northwest is Mount Gubalowka with its stunning panorama of the Tatras from its summit. Zakopane is situated approximately 850 m above sea level, and several brooks flow through the town.

Its climate is determined by its location in the mountains – the average temperature is only 4.3 degrees Celsius, a few degrees less than Poland’s average. The very strong although warm Foehn wind (the strongest measured gust was 280 km/h) that is a feature of the Tatra region can influence how people feel and even the state of their health. Zakopane lies in the Lesser Poland voivodship, about 100 km (2 hours drive) from Krakow.

Zakopane is quite a young city, the first record of its name dating back to the 17th century. Originally there were several separate villages spreading between Gubalowka and the Tatra Mountains. In the 18th century the largest and most prosperous of these was Kuznice (today a district of Zakopane), famous for its steel. Beginning early in the 19th century, the increasing growth of Zakopane overtook the now fading Kuznice, and the expanding population resulted in the construction of the first parish church in 1847. This small and lovely wooden building still stands in Koscieliska Street.

In the second half of the 19th century Zakopane was “discovered” by the Polish intelligentsia and artists, helping it to grow into a fashionable mountain resort. They were captivated not only by the beauty of the mountains, but also by the original folk culture of the region. The rowdy behaviour of the belle époque writers, poets and painters made Zakopane even more popular, as they became a favourite subject of gossip for the other guests at the resort. The landscape and climate of the town led the famous Warsaw doctor, Tytus Chalubinski, to encourage people suffering from heart disease or tuberculosis to come and stay there. Among the most famous visitors and residents were the composer Karol Szymanowski, the actress Helena Modrzejewska, the writer Henryk Sienkiewicz and the painter and designer Stanislaw Witkiewicz – who invented the “Zakopane style”, inspired by the traditional architecture of the region. Admirers of the region founded the Tatra Society in 1873 to protect the wildlife and to popularise the mountains. The development of Zakopane was accelerated in 1899 with the opening of the railway line linking it with Krakow.

The prosperity and popularity of the place continued during the 1920s and 1930s, and in 1933 it received its town rights. Although it still attracted many tourists and artists, such as the very eccentric Witkacy (painter and architect, and son of Stanislaw Witkiewicz), the highlanders themselves were rather poor and this led to great numbers of them emigrating to the United States.

During World War II Zakopane was not the scene of any major activity. Some of its inhabitants were active in the resistance movement as guides to take people across the border and smuggle post, presses or weapons. Following the war, Zakopane, as part of the Polish People’s Republic, continued to develop as a mountain resort. In 1954 the Tatra National Park was founded to protect the territory of the Tatra Mountains.

Would you like to visit Zakopane? Browse the catalog of Poland tours
Check our best tour
Escorted Tours Poland