Zary is one of the largest towns in the Lubusz Voivodeship and a significant economic and culture centre. It is also the biggest town in Polish part of Lusatia. In recent years the number of restaurants, bars and hotels have greatly increased, which allowed for the development of tourism in Zary. 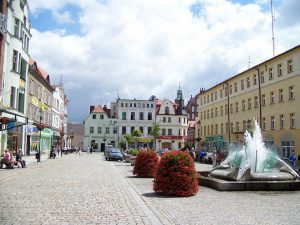 Due to its location near the Polish-Germany boarder, Zary is a significant economic centre. More and more important are wood, electric and metal industries. However, the town may not only boast of many well-functioning plants, but also a great number of many interesting architecture monuments. The most essential are: the Gothic Dewins-Packs-Bibersteins’ Castle from the second half of the 13th century, the Baroque Promnitzs’ Palace from the early 18th century, a geometrical park with a garden palace and the Blue Gate from 1708 as well as the Town Hall from the turn of the 14th century. Worth visiting is also the Sacred Heart Church. It is a gothic building, whose oldest parts date from the 12th century. In the vicinity of the church we find a Gothic rectory and a Gothic-Renaissance building of the old commissariat, today’s city archive.
One of the tourist and natural attractions of the area is the Green Forest, the most popular place for a walk in Zary. We find there three towers: a fire tower, an observation tower (built on the highest hill of Zary Plateau before WW2) and the so called Promitz Tower.
In Zary we find also many sporting facilities, for example: Syrena stadium, Lesna reservoir, Pod Papugami bowling-alley, indoor ice rink and Wodnik swimming pool as well as courts, two modern sport halls, gyms, indoor and outdoor tennis courts and a skate park.

Zary is a town in western Poland, in the Lubusz Voivodeship, populated by approximately 39 thousand people. It lies on Zary Plateau, near Silesian and Greater Poland Lowlands. Geographically the area belongs to Lower Lusatia and lies in between the Bobr and Nysa Luzycka Rivers, i.e. two most important tributaries of the Odra.
Zary is also a great transport centre. The town is located approximately 10 km from the truck road no. 18 and at the crossroads of the strategic roads no. 12 and 27. Moreover, there is a train trail going through Zary from Wroclaw (hint: take a tour to Wroclaw by train) to Berlin.

About 1030 Zara settlement was joined by Mieszko II Lambert to Poland. There was a trade road called the Salt Route going through its area. It was of a great importance to Zary’s development in the Middle Ages and succeeding years.
Zary obtained the town rights in 1260. The town many times was changing borders; it was under the domain of Silesian Piasts, Czech kings and the Saxon electors. From 1815 until the end of WW2 Zary together with the whole area of Lower Lusatia belonged to Prussia, and later to Germany.
During the Second World War, the Focke-Wulf aerospace manufacturer was located in Zary. On April 11, 1944 the Allies destroyed a great area of the Old Town. Red Army troops entered Zary on February 13, 1945. The town, however, was conquered three days later. As a result of Potsdam Conference, it was joined to Poland.

Would you like to visit Zary? Browse the catalog of Poland tours
Check our best tour
2023 dates available
Escorted Tours Poland