Zgorzelec is a town in the south-western Poland, in the Lower Silesian Voivodeship. It may boast of many interesting monuments and therefore it is an unquestionable attraction for history lovers. Moreover, its location near the border with Germany makes the town a perfect starting point to Poland’s western neighbour. 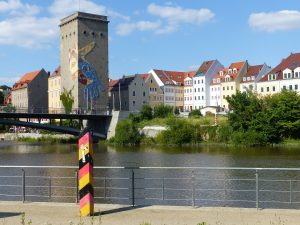 Zgorzelec is a listed town. The list of National Heritage Institute involves such monuments of Zgorzelec as: the park complex (1870-1930), the oldest part of town – Nyskie Suburbs (Polish: Przedmieście Nyskie), house of Jakub Böhme, palace in Francuska Street from 1730 as well as numerous houses and tenements.
While in Zgorzelec you should also visit John the Baptist’s neo-Roman church, the church of St. Boniface and the water tower in Sw. Jana Street.
Zgorzelec is also of attraction to active visitors. The main sports centre here is Sport & Recreation Centre, in which you might play football and tennis and swim in the indoor or outdoor pool.
There is the Lower Silesian Route of St. Jacob running through the town. It is a part of the pilgrimage route to St. Jacob’s grave in Santiago de Compostela in Spain.

Zgorzelec is a seat of the county in the Lower Silesian Voivodeship, by the Lusatian Neisse. It is populated by 32 332 people.
Zgorzelec lies on E40 European route, which connects French Calais with Kazakhstan’s Ridder. Other important routes running through town are the country road no. 30 (Zgorzelec-Jelenia Gora) and voivodeship roads no. 317 and 352 (Bogatynia-Kunratice).
Moreover, there are two railway lines going through Zgorzelec: E 30 (a part of 3rd Pan-European transport corridor from Dresden to Lviv) and a line no. 274 (Wroclaw Swiebodzki – Jelenia Gora – Görlitz).

First records about Zgorzelec are from 1071. The town’s location had a great impact on its establishment and development. The most important trade routes crossed here. They were the Via Regia (the Royal Route) and the road from Prague to Baltic ports. Numerous merchants, pilgrims, knights, German settlers and troops were passing Zgorzelec at that time.

In 1220 Zgorzelec obtained town rights and in the 1250s many Flemish clothiers settled here, which boosted the town’s development and made an establishment of the second town (Nowy Rynek) necessary.

In 1329 the town became a part of Bohemia, which reinforced its economic significance. The golden age of Zgorzelec was in between the mid 15th century and the early 16th century. At that time Zgorzelec was the greatest town on the Via Regia.

The first heavy blow to a town was Ferdinand I’s decision to withdraw town privileges and confiscate land properties. The lost properties were eventually regained but it cost a lot of money. Also the Thirty Years’ War was tragic in results to Zgorzelec.

In the second half of the 17th century the town was recovering from recent wars. Local trade and craftswork began to develop. Unfortunately, the 18th century again brought wars and destructions. The Deluge and Silesian Wars cost much money.

In the 19th century, the Congress of Vienna decided to join Zgorzelec to Prussia. It was a good time for the town. Its cloth was exported to German’s duchies by the Danube, southern Italy, Greece, Turkey, Persia, India and China. Textile, machine, optical, ceramic and chemical industries developed.

On 8 May 1945 Zgorzelec was taken by Soviet troops and a few months later, as a result of the Potsdam Conference, the eastern part of town was joined to Poland.

Would you like to visit Zgorzelec? Browse the catalog of Poland tours
Check our best tour
Escorted Tours Poland