Being a relatively large town, an important administrational and a cultural centre, Bielsko-Biala is exceptionally attractive as a base for your next vacation. The close proximity of the mountains, some of them lying within the town’s suburban area, the many green areas and the well-developed skiing infrastructure all make it a great destination for anyone seeking a break that is both close to nature and to urban facilities. Interestingly, until as recently as 1951, Bielsko and Biala were two separate towns, each belonging to separate provinces: Silesia and Lesser Poland (with capital in Krakow). 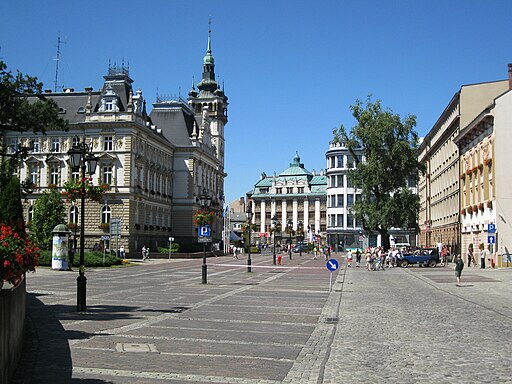 Situated at the foot of the Beskid Slaski and the Beskid Maly Mountains, Bielsko-Biala has extremely rich natural resources. It belongs to a region often referred to as the “Green Lungs of Poland”. One of the most beautiful places is the upper part of the Wapienica River valley, including the extraordinarily picturesque part known as Luiza’s Valley.

Among the most favoured attractions are the numerous trails leading to the most enchanting nooks of the Beskidy Mountains, and the chance to take a cable car trip to Szyndzielnia (1026 m) anytime throughout the year. During the winter there are a number of very popular ski lifts in Debowiec, Klimczok and Magurka. Whatever active leisure pursuit gets you going, you will find something here to interest you. In the Straconka area you can find many horse-riding schools, while Bielsko-Biala offers numerous swimming pools and tennis courts, a kart track, and a sports airfield offering parachuting and gliding-related sports. There is also a chance to organise a flight over the town or the mountains.

If you need something less fast paced, then there are many interesting sights to see in the town itself. It is worth visiting Sulkowski Castle, built in the middle of the 14th century with a gallery inside where music concerts take place, and then there is the Saint Nicolas Cathedral with its exquisite stained glass windows and of course the Weaver’s House dating from the 18th century.

With about 175,000 inhabitants, Bielsko-Biala is one of the most important centres of the Silesian Voivodship outside the Katowice conurbation, and was once known as the “town of a hundred industries”. Even today Bielsko-Biala manages to successfully continue its traditions in wool processing and cloth production.

Surrounded by the beautiful Beskidy Mountains, Bielsko-Biala plays the role of capital of the Podbeskidzie region, while these same neighbouring mountains create a good microclimate. The characteristic feature of the Bielsko-Biala area is the plentiful supply of hills and valleys, many of them wooded. The highest point of the town suburban area is Mt Klimczok (1117 m), while the Bialka River flows through the town proper.

There are many legends that describe the history of the foundation of the town. According to one there was once a castle that had been built by a group of bandits who regularly attacked the merchants passing through the area. They were caught and sentenced to death for their crimes, the verdict was carried out and their fortress destroyed. The location where they died had been long forgotten by everyone until it was rediscovered by Casimir, the Duke of Cieszyn, while out hunting. He decided to build another castle there, one that led to the eventual creation of Bielsko-Biala.

The first traces of any settlement dates from the 12th century. Originally there were two separate towns, each on opposite banks of the Biala River. The separation was created when the river became a state boundary in 1457. Bielsko was founded in the 13th century on the “salt route” leading from Kiev through Krakow to Vienna. Biala appeared in the second half of the 15th century, on the other side of the river from Bielsko. Both towns owed their development to cloth production.

Bielsko was once a part of the Czech state and the Austro-Hungarian Empire, and then after the first partition of Poland, Biala was also incorporated to the latter empire. The influence of Viennese architecture can still be seen in the design of many buildings in Bielsko-Biala, giving the town a very specific atmosphere.

Traditionally this area has been home to many people of different nationalities, including Poles, Czechs, Slovaks, Germans, and Hungarians. This led to a religious differentiation within the town, especially due to the strong reformation movement.

In the 19th century, Bielsko and Biala grew to become an important industrial centre for cloth and wool production. From the second half of the 19th century both towns enjoyed a significant degree of autonomy as part of Cieszyn Silesia and Galicia.

These lands were returned to Poland following World War I, and during the interwar period Bielsko and Biala remained separated by the provincial boundary between the Silesian and the Krakow Voivodships. However, in 1951 Bielsko and Biala were made into one town.

Would you like to visit Bielsko-Biała? Browse the catalog of Poland tours
Check our best tour
Escorted Tours Poland