Bierun is a Silesian town and a part of Bierun-Ledzin County. Despite its close proximity to the Silesian agglomeration, the town attracts lots of tourists. Its location near the Beskids makes Bierun one of the mountains lovers’ favourite places. Moreover, the beauty of this town is heightened by its numerous monuments. 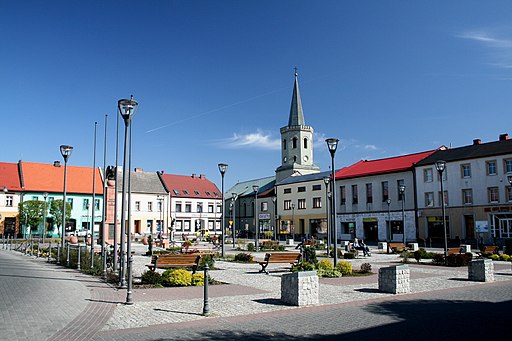 Taking into account the number of inhabitants, Bierun is the lagest commune of Bierun-Ledzin County. It has the area of 4 ha and the population of approximately 19 thousand. The town is divided into two units: Small Bierun (Polish: Bieruń Mały) and Big Bierun (Polish: Bierun Duzy). They are located in a distance of 7 km from each other.

The town is situated in the most industrial and urbanized region of Poland. Its character was shaped after the Second World War by the development of mining and siderurgy. In 1970s the Piast mine came into existence, but now it is rather a monument than a workplace. At present, except for the extraction of coal, also such industries as: food, car, chemistry, farm and construction are of great importance.

Bierun itself is also industrial, but the town’s neighbourhood is famous for its beautiful greenery. It is worth going for a foot or a bike trip in the town suburbs. In the summer season you may go swimming in Lysina reservoir and in autumn mountains lovers may go for a hiking trip to the Beskids.

Bierun is also a “treasury” of architectural monuments. Tourists will surely be delighted by a beautiful wooden St. Valentine Church. Saint Valentine is the town’s patron. The church, usually called Walenciak, comes from the 17th century and inside of it you may find St. Adalbert’s relics. The church is situated in the Old Town. Worthy of a visit is also a Jewish cemetery from 1750.

Another interesting place is a hill mounded in Komes Urban’s times, in the Mleczna valley. It is the oldest monument in Bierun. This hill from 1295 resembles of a quadrilateral in shape, but its corners are rounded and the top is cut. In the 13th century the hill was surrounded by a moat and had the defence function.

Bierun is located in the south-east of the Silesian Voivodeship, in the valleys of the left-side Vistula tributaries. The town is also surrounded by such rivers as: Przemsza, Mleczna and Gostynka. Bierun lies in a close proximity to Tychy–Oswiecim and Myslowice-Pszczyna routes, but convenient transport routes are also A4 motorway from Boleslawiec to Krakow and the country road no. 44 from Gliwice to Krakow. The town lies in a distance of 30 km from the Beskids.

Bierun is a town with a rich, over 600 years old, history. The first records about this settlement come from 1376. Immediately after that Bierun was given town rights from John II, Duke of Opava-Ratibor. The place was well-known at that time for the Krakow-Opawa trade route that run through Bierun.

The convenient location of the town was beneficial for its development. There were merchants from all over the country going through Bierun. In the 16th century Bierun obtained market privileges, thanks to which a regular trade started. Craft, shoemaking and textile industry gained in importance. Until 1555, the town was under the rulings of the Silesian Piasts. At that time the first brewery came into existence, the neighbouring ponds were extended and fishery was developed.

In 1743 Bierun was joined to Prussia and lost town rights. However, in the 19th century the town regained its former privileges. It was the golden age of Bierun for many important buildings were erected at that time. They were Central Custom Duty Office building, a school, a drug store, a butcher’s and a bakery among others.

The 20th century brought two World Wars, but although Silesia was destroyed, it underwent an intensive industrialization and urbanization. In 1970s in the area of today’s Bierun Piast black coal mine, Slask diary (the present Danone) and Fabryka Samochodow Malolitrazowych, i.e. Polish automobile factory (the present Fiat Auto Poland) came into being. At that time Bierun was joined to Tychy and regained the town rights in 1991. Still, however, there are disputes about the administrative boundaries of both of these towns. There is no doubt that Bierun’s regaining independence fostered its growth.

Would you like to visit Bieruń? Browse the catalog of Poland tours
Check our best tour
13 days
Escorted Tours Poland