The city of Bytom is most often associated with steel mills and coal mines. Only a few know that this place is also famous for its beautiful architecture and victories of Bytom sportsmen. The city’s developing infrastructure allows tourists for an active rest and nature reserves give them a chance to admire rare species of trees and birds. 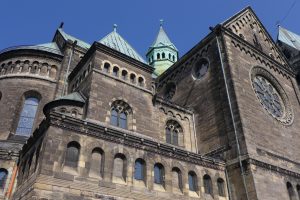 In the 19th century and in the PRL (People’s Republic of Poland) period Bytom became an important economic centre. The city, similarly to neighbouring Katowice, specialized in heavy industry. Nowadays, it is services and trade that are developing most intensively in Bytom. City’s authorities organise cyclical events, such as: Annual International Contemporary Dance Conference and Bytom Days.
Bytom might be a good destination for keen sportsmen. The city’s main attraction for skiers and snowboarders is Dolomity Sportowa Dolina sport & recreation centre located in Bytom – Sucha Gora. The city is also an important culture centre. We may visit Gornoslaskie Museum (trans. Upper Silesian Museum) and Opera Slaska (trans. Silesian Opera) here.
As for worthy a visit monuments, we find a lot of them in Bytom. The oldest ones are: Church of the Assumption of the Virgin Mary, St. Adalbert Church and dolostone underground passages called Piwnice Gorywodow (trans.: the Gorywodas’ basements), all built in the 13th century. A very interesting place is also the Old Town with many listed tenements. Nature lovers may lead towards Segiet beech tree reserve in Sucha Gora or the one in Zabie Doly with more than 100 bird species.

Bytom is situated at the altitude of 280-290 meters above the sea level, in the central part of the Silesian Highlands. The city lies in the area of Slasko-Krakowska climate region, which is characterized by ocean currents and occasional series of tropical air masses.

The first records about the region come from the 12th century, but it was in 1254, when Bytom received city rights. Bytom’s urban form, similarly to most of medieval European cities, was based on Magdeburg law. The city’s market was originally tiny, but it was extended after the Second World War. In the end of the 13th century Bytom was surrounded by battlements, which were later strengthened. This, however, did not stop the Hussites from invading the city in 1430. Silesia has always been an apple of discord between Poland and Austria or Germany. In the 16th century Bytom came under control of the Habsburg Monarchy, but in 1679 it became Free State Country. In the 19th century the city rapidly grew and industrialized. A railway station, coal mines (e.g. Rozbark and Szombierki), the Pokoj steel mill and the Klara Zink-works were built in Bytom in that period.
In the beginning of the 20th century Bytom took part in Silesian Uprisings. In 1921, during Upper Silesian plebiscite, the majority of the city’s inhabitants voted for Bytom joining to Germany. Twenty four years later, as a result of the Potsdam Conference, the city was transferred to Poland. In the post-war period Bytom was a main destination for repatriated Poles from the eastern provinces annexed by the Soviets. Nowadays, the population of Bytom is still a mixture of different cultures and ethnicities.

Would you like to visit Bytom? Browse the catalog of Poland tours
Check our best tour
2023 dates available
Escorted Tours Poland