Czestochowa lies among the picturesque Jurassic rocks of Krakow-Czestochowa Upland, topped with the ruins of Medieval castles. But for the majority of Poles, Czestochowa is associated with the Jasna Gora Monastery and the icon of the Black Madonna, credited with many miracles. The sanctuary is famous as one of the world’s greatest places of pilgrimage, but its imposing architecture also lures many tourists. 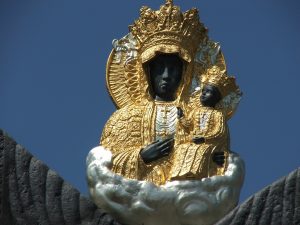 Czestochowa plays a crucial role for the Roman Catholic Poles, being a kind of spiritual capital to them. The cult status of the Jasna Gora monastery, one of the most important pilgrimage destinations of the Christian world, has been growing along with the distinguished history of the site. It has become a symbolic mainstay of Polish identity and the Roman Catholic religion, as the hill of Jasna Gora was besieged by Swedes, Russians and Germans, who were all of different faiths.

The Czestochowa sanctuary is also an outstanding monument of 15th century architecture, with later Renaissance and Baroque alternations. The number of pilgrims and tourists arriving to the city amounts to 5 million a year. Most of them limit themselves to visiting the church and the monastery, since the rest of the town, apart from the historical centre, is less interesting. The Communist authorities made quite an effort to turn Czestochowa into an industrial centre in order to outweigh the religious importance of the city, and they succeeded to a large extent. Apart from the most representative street (Avenue of St Virgin Mary) that starts at the foot of the Jasna Gora, Czestochowa seems to be rather unattractive and provincial. However, it is worth your time to drop into the Museum of Matches. Located in an old factory, this unique attraction is incomparable with any other with Europe.

Czestochowa is situated in southern Poland, 140 km from Krakow, on the Warta River and its confluents, the Konopka and Stradomka Rivers. In terms of administrative divisions, it belongs to the Silesian province, being its second city after Katowice, but geographically Czestochowa belongs to the Krakowsko-Czestochowska Upland, the lovely region spreading between the two cities. The average height of the upland is 350-450 m above sea level. Its main attraction is the Eagles’ Nests Trail, the string of castles built on top of the nearby Jurassic rocks and hills, known as Olsztyn, Ogrodzieniec, Ojcow and Pieskowa Skala. They once formed a line of fortifications together with Jasna Gora in Czestochowa, which was once a defensive point.

The first time the name of the city was mentioned was in 1220, but it had already been founded in the 11th century. The origin of the term ‘Czestochowa’ is connected with the name Czestoch (or Czestobor, Czestomir), who may have been its founder. In the 14th century, it gained the status of a city, since 1502 under the Magdeburg Law.

Intense development began with the arrival of the Pauline Order from Hungary in the late 14th century, which established the monastery on the top of Jasna Gora Hill. Two years later, the monks received the icon of the Black Madonna, which soon began to draw in a large number of pilgrims. The first brick-and-stone sanctuary was built in the 15th century, to be converted into a fortress by the construction of the defensive walls in the 17th century. 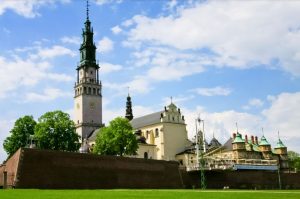 The Pauline monastery played an important role during the Swedish invasion in 1655, referred to as the “Deluge”, when for several months around 4,000 Swedes besieged Jasna Gora with its 250 defenders. They eventually failed to conquer the hill. The determination of the winners spread to the rest of the country, which earlier had appeared to barely resist the invaders. In the 18th century, Jasna Gora was again a place of battle, serving as a fortress for anti-Russian Bar Confederation insurgents. They were led by Kazimierz Pulaski, a later hero of the American War for Independence, where he was mortally wounded during the battle of Savannah.

After the Second Partition of Poland, Czestochowa was passed to Prussia. During the Napoleonic Wars, it was incorporated into the Duchy of Warsaw established by the Emperor of France. Following 1815, Czestochowa was within the borders of the Polish Kingdom, dependent on Russia. The 19th century brought rapid growth to the city. In 1819, construction began on today’s main street and thoroughfare, Avenue of St Virgin Mary. The opening of the Warsaw-Vienna railway in 1846 also stimulated the development of the city, linking it with the rest of Europe. Many new factories and manufactures emerged.

After the German occupation during World War I, the town became part of the independent Poland. It lost its importance as the steelworks and mines of the nearby city of Katowice, newly incorporated into Poland, proved to be more efficient. In 1939, Nazis captured the town and annexed it to the General Government. During World War II, practically the entire Jewish community of about 40,000 people were killed. The Red Army that entered Czestochowa in January 1945 saved the Pauline monastery, which had been mined with bombs by Germans. After the war, the industrialisation of the city continued. The steelworks of Czestochowa, originally built in the 19th century, were extended and renamed after Boleslaw Bierut, the first President of Communist Poland. Today, the city remains an important industrial and academic centre.

Would you like to visit Czestochowa? Browse the catalog of Poland tours
Check our best tour
2023 dates available
Escorted Tours Poland

The Spirit of Poland Min. 2 pax