Modern Rybnik is a hub for local administration, transportation, economy, education and culture for neighbouring towns, as well as having several historic monuments of its own that are well worth a visit. The fine selection of parks, squares and gardens have earned Rybnik a reputation as ‘the green city of Silesia’, while the surrounding rivers, lakes and forests provide many opportunities for tourism and recreation. 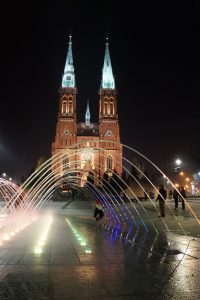 Among the sights you can explore in Rybnik are the admirable Academic Church, a medieval prince’s castle, the Old Church erected between 1798 and 1801, a late-Baroque statue of St. John Nepomucen, a classicist Old Town Hall and the District Starosty building from 1887.

Varying in size and species of plants, the countless parks, squares and lawns draw locals and visitors alike to relax in the sun and enjoy the scented verdure. There are paths for strolling and benches for sitting, while some green spaces are graced with fountains and limpid pools. Rybnik’s greenery resulted in being awarded first place in the Kwietnik (“Flowerbed”) magazine contest for the most flowered Polish city.

If you are looking for an active break based in a city, then the area around Rybnik reservoir offers a range of activities, including horse-riding and water sports. Moreover, Rybnik has as much as 200 km of cycle paths, linking the city with several nearby towns and passing through many of the area’s historic and cultural attractions. The main centres for recreation in Rybnik and its vicinity are the Sports and Recreation Centre in Rybnik-Kamien, ‘Buk’ and ‘Pod Debem’ in Rudy and the Sunday Leisure Centre in Szymocice.

Rybnik is the 25th largest city in Poland, and is 380 km from Warsaw, 111 km from Krakow and 52 km from Katowice. It is situated in the south-western part of Silesia, within the Raciborz Oswiecim Valley on the Rybnik Plateau and at an altitude of 210-290 m above sea level. Rybnik is located on two rivers – the Nacyna and the Ruda, both eventually flowing into the Odra. To the north of the city and to the north-west of Katowice is the Golejowska Highland.

Little is known about the origins of Rybnik. In the Middle Ages it was a fishermen’s settlement located on a frequently used merchant route passing from Krakow, Oswiecim to Raciborz and Wroclaw. The settlement’s name comes from the local fishing ponds (the Polish word ‘ryba’ means ‘fish’).

At the turn of the 9th and 10th centuries there were three Slavonic settlements in the area, but they eventually expanded to form one urban district. The establishment of Rybnik as a city, based upon the German Law, dates back to sometime prior to the year 1308. At that time, the city was not yet the capital of the separate Duchy of Rybnik in its own right, but belonged to the Duchy of Raciborz.

The city came to be a feuding point for the Czech Crown in 1327. With time, Rybnik developed into a local centre for trade and craftsmanship and maintained its reputation for its fishing culture. In the 15th century the city was demolished by the Husites, but in 1433 Rybnik hill witnessed a defeat of the supporters of Husitism.

In 1526, Rybnik and its environs formed a separate area known as the State of Rybnik, and with the entire region of Silesia it came under the Austrian Habsburg rule. From 1740, Rybnik was part of Prussia, and then when King Frederic William II bought it in 1788, the State of Rybnik became a direct property of the Prussian Crown. The year 1818 marked the establishment of the District of Rybnik, with Rybnik as its capital. Of all local industries, the hard coal mining industry advanced the fastest.

In the period after the First World War the residents of the district took active part in the Silesian Revolts and Rybnik served as one of the major centres of conspiracy in preparing the successive uprisings. The city was officially returned to Poland in July 1922.

Rybnik continued to be a district city throughout the twenty years between the two world wars. Then a metropolis of upwards of 28,000 inhabitants, it developed spectacularly to gain renown as the second most beautiful city in Poland after Poznan. Unfortunately, the break out of the Second World War hindered further progress.

The German Army captured Rybnik on 1 September after breaking the Polish army’s heroic defences. In spite of the German terror, resistance in many organisational units was widespread in Rybnik. The liberation by the Soviet Army took place on 26 March 1945, after some violent fighting.

Would you like to visit Rybnik? Browse the catalog of Poland tours
Check our best tour
2023 dates available
Escorted Tours Poland

Recommended tours while stay in Rybnik