Although Pszczyna is not a significant tourist resort, it is undoubtedly worth visiting. With a history dating back nearly 700 years, Pszczyna has a number of historic buildings that contribute to the town’s rich past. Pszczyna also serves as an ideal starting point to visit the Auschwitz-Birkenau Memorial and Museum in Oswiecim, located only some 25 km east of Pszczyna. 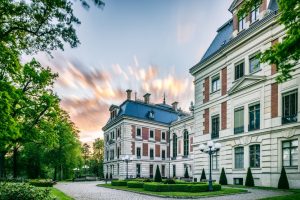 Pszczyna is a listed town with a lot of sites to visit. The most interesting are: market square with tenements, Chinese Gate, Gate of the Chosen, Frykowka, Pod Okiem Opatrznosci and Pod Murzynkiem tenements, Pod Baranem house and Pszczyna Castle.
The castle is a former property of magnates, built in the 11th or 12th century. The last owners of the castle were the Hochberg von Pless dukes from Ksiaz. In between 1870 and 1876 they rebuilt the palace in a Neo-Baroque style, in which it has remained till these days. Since 1946 has been a seat of the Muzeum Zamkowe (Castle Museum). It has its original equipment and furniture, which makes the castle one of the most valuable monuments of residential architecture in Poland.
Another worthy of visit museum in Pszczyna is Muzeum Prasy Slaskiej (Museum of Sileian Press).

Pszczyna is a town and seat of the county in the Silesian Voivodeship, situated in Oswiecim Basin, by the Pszczynka. The town has the population of 25,400.

The first records about Pszczyna are from 1303, but the town was probably established much earlier. The main trading route between Kievan Rus and the Moravian Gate ran through Pszczyna from the early Middle Ages.
Pszczyna was taken over repeatedly throughout history. In the early Middle Ages the land of Pszczyna was a part of Lesser Poland. It was Duke Casimir II the Just who gave the land to Duke of Opole and Raciborz, Mieszko I Tanglefoot in 1178. From that moment on, Pszczyna has been integral part of Silesia.
In 1407, John the Iron separated the area that is present-day Pszczyna from his duchy and gave it to his wife Helena of Lithuania, niece of Władysław Jagiełło.
The last proprietor of Pszczyna from Piast dynasty bloodline was Casimir II, Duke of Cieszyn. In 1517 he sold Pszczyna to one of the most powerful Hungarian magnates, Aleksy Thurzo. From then on, the land of Pszczyna, which then constituted a part of Reich, was called the “Free State of Pszczyna.”
After the Thurzo family, the owners of Pszczyna became the Promnitzs. They ruled here over two centuries. It was hard times for Pszczyna, which was ravaged and robbed during the Thirty Years’ War by different armies and again a hundred years later, during the battle of Silesia between Prussia and Austria. As a result of this battle Pszczyna became a part of Prussia.
The next landowners of Pszczyna were the Anhalts, who ruled here from the mid 19th century. After that, the land of Pszczyna again changed its owners (the powerful Hochberg family).
After the Third Silesian Uprising and the Division of the Upper Silesia, Pszczyna together with the whole county was joined to Poland. On 29 June 1922 Polish army officially entered the town. The power was given to Polish administration and Jan Figna became the first mayor.
On 1-2 September 1939, there were defensive fights in the surroundings of Pszczyna and later the Battle of Pszczyna took place. German forces breached main Polish defensive lines protecting Silesia.
Year 1945 was tragic for Pszczyna. It was in January that Nazis evacuated prisoners of Auschwitz Birkenau. Many of them were then killed or died from fatigue in the streets of Pszczyna.
The town was eventually liberated on 10 February 1945 by the Red Army.

Would you like to visit Pszczyna? Browse the catalog of Poland tours
Check our best tour
Escorted Tours Poland