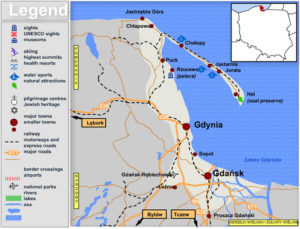 The Hel Peninsula is a long and thin tongue of land, extending 35 km east from Wladyslawowo (a town near the Tricity – Gdansk, Gdynia and Sopot) out into the Baltic Sea, with a width varying between 100 m and 3 km. Some 200-300 years ago it was a group of islands, but over time it has become a peninsula by the sand brought in by sea currents. Today it separates the Puck Bay and the Gdansk Bay from the open sea.

The area of the Gdansk Bay and the Hel Peninsula is part of one of the most popular summer destinations in Poland. Wonderful beaches with plenty of opportunities to enjoy water sports, numerous bars, discos and souvenir shops all help to lure many visitors throughout the season. Out of season, the local resorts become more peaceful and they are often chosen to host conferences and other business events.

HOW TO GET THERE
Gdansk and the whole Tricity are easy accessible from any major Polish city. Gdansk has also an international airport, providing connections with many European cities. The journey from Warsaw takes about five and a half hours by car (route E-77) and over four by rail. Once at the Tricity it is easy to get to the Hel Peninsula by driving north-east along route E-28, passing Rumia, Reda (after Reda turn right and continue along 216), Puck and then Wladyslawowo (this takes about an hour). Travelling along the peninsular is easy, as there is only one road and one railway line – so you won’t miss any of the towns and villages there.

Recommended hotels on the Gdansk Bay