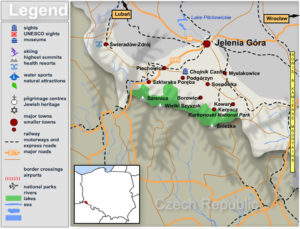 This is a strip of moderately high mountains (up to 1600m) belonging to the Sudeten massif. They are situated along the Polish-Czech border, forming a natural boundary between Silesia and Bohemia. There are also some smaller mountain ranges adjacent to Karkonosze, such as the Izerskie Mountains and Rudawy Janowickie. The main resorts of Karkonosze include Szklarska Poreba and Karpacz.

The slopes of Karkonosze are covered with pine, fir, beech and birch woods in the lower parts and alpine meadows combined with dwarf pine at higher levels, the slopes of which being surprisingly steep. Distinctive features of the landscape are large hollows bordered with rock cliffs, carved out by glaciers. An ample area of the mountains is enclosed within the borders of the Karkonoski National Park in order to protect the wildlife and landscape of the region. A wide range of outdoor activities, such as hiking or cycling, are great attractions of the Karkonosze.

HOW TO GET THERE
Jelenia Gora, a local urban centre of about 90 000 inhabitants, forms the gateway to the Karkonosze Mountains. It is served by buses and trains from Wroclaw several times a day, and there are a huge number of buses to Szklarska Poreba and Karpacz. Szklarska Poreba is also connected by rail with Jelenia Gora and some other towns of Poland, including Wroclaw, Poznan, Szczecin, Gdansk and Gdynia. The region is crossed by road no. 3 (part of international route E65) and road no. 30.