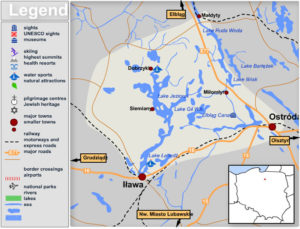 Ilawa Lakeland is situated west of the Masurian Lakeland, in northern Poland. There are many lakes, with the largest being Jeziorak, also known as the longest in Poland. If you like trees then you will enjoy the extensive woods which help make this region an ideal holiday destination not just for amateur sailors, but hikers and cyclists too. Not so popular as Masuria, this region is less crowded hence more attractive for those who seek tranquillity. It is also a haven for rare birds, including the white-tailed eagle, osprey and kite, as well as animals, including beaver, otter and various types of bats.

Jeziorak, with its numerous bays, islands, peninsulas and hidden wild nooks offers a wide range of landscape and sailing conditions. The main towns of the area are Ilawa, with its port and its equipment rentals, and Ostroda at the southern terminus of the Elblag Canal.

HOW TO GET THERE TO ILAWA LAKES
Ostroda is easily accessible by car via the E77, from both Warsaw and Gdansk. However, if you are coming from Torun, take road 15. While the closest big town is Olsztyn, situated only 40 km from Ostroda, the closest international airports are Warsaw’s Okecie and Gdansk’s Rebiechowo. Both Ilawa and Ostroda have direct rail connection with Warsaw, the journey taking about 4 hours.