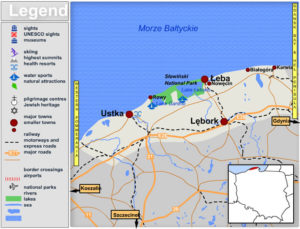 The term Pomerania (Pomorze in Polish) is used to describe the whole area along the Baltic Sea coastline in the north of Poland, as well as the lake district situated away from the coast. The subregion known as the Pomerania and Slowinski National Park includes the central part of the shore area, extending over the Western Pomerania and Gdansk Bay and Hel Peninsula area to the east.

Protecting the most attractive part of the Baltic southern coast, its forests, plant cover, peat, miscellaneous fauna and picturesque landscapes, the Slowinski National Park was included in the World List of Biosphere Reserves in 1967. There are as many as 15 strict reserves in the park, in total covering an area of more than 6,600 ha. The Slowinski National Park is most famous for having the biggest sand dunes in Europe, which move with the wind, grow and change shape, providing a sight worth beholding.

HOW TO GET THERE
Pomerania is best accessed from the two major cities of Szczecin and Gdansk, both of which have international airports. Once you get to the region, you will find it easy to move between the smaller towns and villages. The town of Slupsk serves as a junction stop for the Slowinski National Park, offering good railway and bus connections with all the larger cities in Poland. Rowy, Leba and Gardna Wielka are three villages lying closest to the Park, and they all can be reached from Slupsk. In the high season, between July and September, you can get to Leba and Rowy by rail or bus, while to Gardna Wielka only by bus.