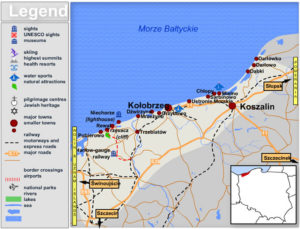 Western Pomerania is the north-west region of Poland, with its capital in Szczecin and bordering with Germany on its western side. The area has just about anything a vacationer could want: spas, holiday resorts, sandy beaches, lakes, woodlands and a number of historic locations. Beyond the boundaries of the main destinations of Koszalin, Kolobrzeg, Mielno and Darlowo there are also many smaller, more intimate places offering great opportunities for relaxation and recreation.

As well as having an attractive coastline, with both low-level areas and the picturesque cliffs of the village of Trzesacz, Western Pomerania is known for its lovely natural environment. The Wolinski National Park, situated nearby, features wonderful coastline scenery, alluring lakes and uncommon specimens of plants. This is not, however, everything – Western Pomerania has to date 6 natural parks, 75 reserves, 3 forests and upwards of 1,100 Sites of Unique Nature.

HOW TO GET THERE
Travelling to the region is quite simple thanks to the airport near Szczecin (Szczecin-Goleniow), an intercity railway, a motorway and regular ferries from Kolobrzeg and Swinoujscie (in the summer months also from Darlowo). Szczecin airport offers domestic as well as international flights, while the small airports in Koszalin and Kolobrzeg have direct connections to Warsaw. The capital of the region is located at the meeting point of two important international routes – one between Berlin and Gdansk, the other linking Prague with the port in Swinoujscie. National road no 6 connects Szczecin with Goleniow, Koszalin and Gdansk, thus linking the Western-Pomeranian Voivodship with the Pomeranian Voivodship.